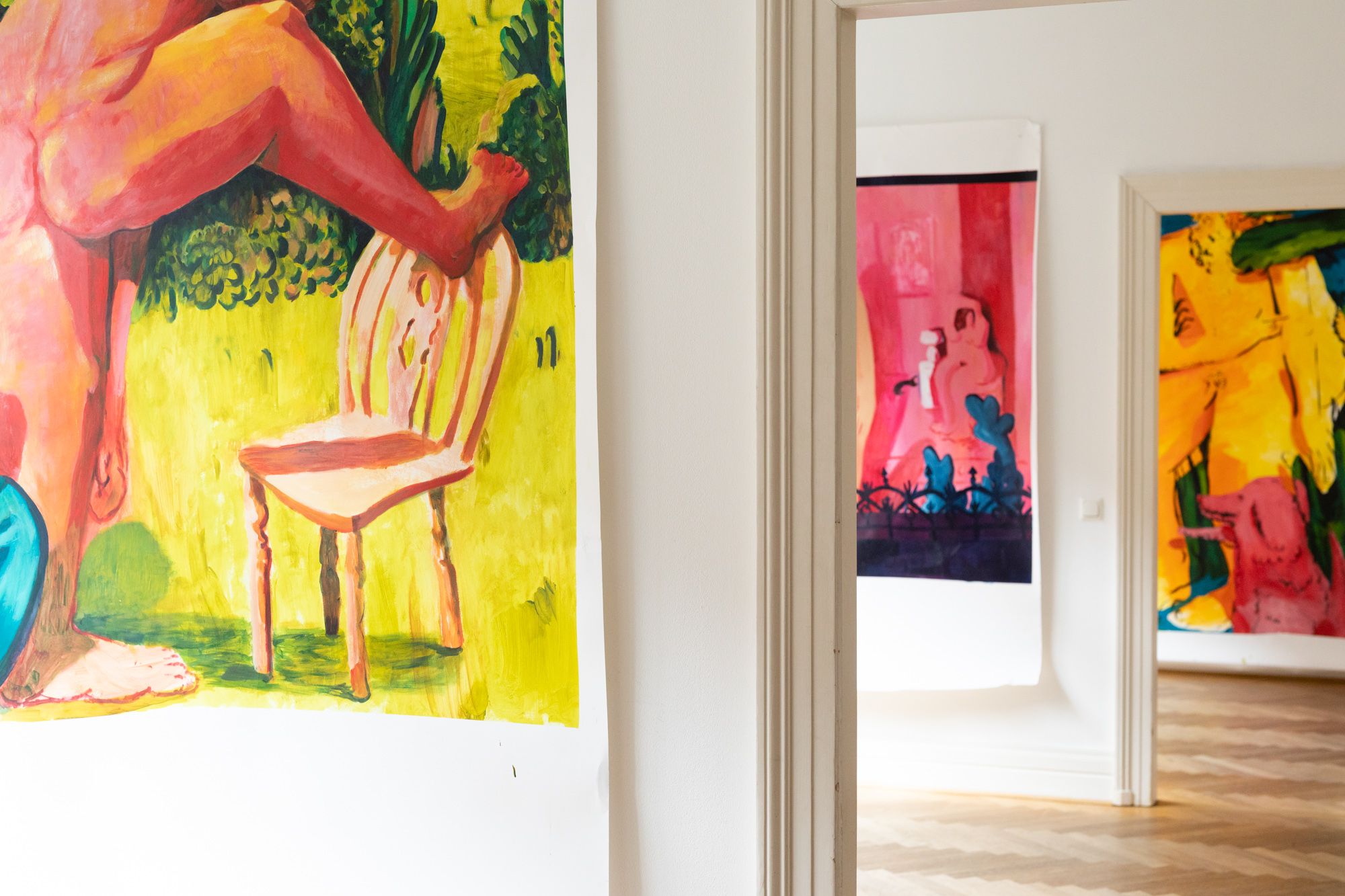 In his artistic practice, made up of color and abstract figuration, he takes inspiration from references both autobiographical and historical as well as the fantastical and contemporary magical realism. His work is parallel to all those changes that have characterized his personal life and constitutes a clear attempt to jealously preserve the fruitful wonder and sense of imagination childishly tempered throughout the stages of his life. His notebooks, vademecum faithful, as well as his adjacent drawings, are a way to develop the different stories that he creates in his mind.

When he paints, he uses long brush strokes to slowly track down the image through different textures and vivid bands of color in the initial layers of paint. His work is undoubtedly influenced by observation, abstraction, imagination, and elective conversations. An extraordinary fever seems to have struck Santiago Evans Canales during the entire period of production of this new series of works, grouped together in this solo exhibition aptly titled “Cabin Fever.” While the whole world was focused on the spread of a virus, overwhelming and unknown, and on attempts to manage it, Evans was viscerally immersed in something extremely familiar, an evil so benign it could only be perceived in the more acute moments of its course, legacies of the past, atavistic sensations, gentle habits, smells never completely eliminated and above all, colors shaken by an inner flow that touches the tempo of movie stills. So here before our eyes we see the mysterious results of rotations of the theatrical camera, rotations addressed to the artist himself, of fanciful unlikely biographies, of mnemonic objects, of animals that dictate the rhythm of a life, of figures on a large scale that kick the line between reality and fiction further and further away. The warmth of Santiago’s painting does not lay exclusively in the choice of colors but also in the overall set of elements at play. Every addition, even in the sculptural works present, contains the flavor of both fantasy and memory, a naive but conscious state in which awareness unfolds the complexity of its creation. A true and personal magical realism, and a lucidly astonished vision of reality, is what you admire when you pose yourself in front of the works that constitute “Cabin Fever.” Step by step reality develops a character of magic given by the visual emphasis of a gesture or an object and their permanence in time, as if their familiarity made them eternal, almost sacred, and therefore magical – magic obviously aided by the exercise of imagination – which is at the same time extremely real because it is cyclically possible or has already happened. Here before us is an excited fever… resulting from the simultaneous acceleration of frames of consciousness. A fever, which we can thank for being able to catch a glimpse of an ecstatic child, in the presence of a macrocosm that explodes constantly and performs in a heterogeneous jubilation of shapes and colors, a sort of New Cinema Paradiso that is aware of kinetic art generated and transplanted using acrylic on paper and of which Santiago Evans Canales is the only and undisputed projectionist.

Santiago Evans Canales, born in 1996, is an artist originally from Mexico City who grew up in different parts of the Americas and currently lives and works in Antwerp, Belgium. 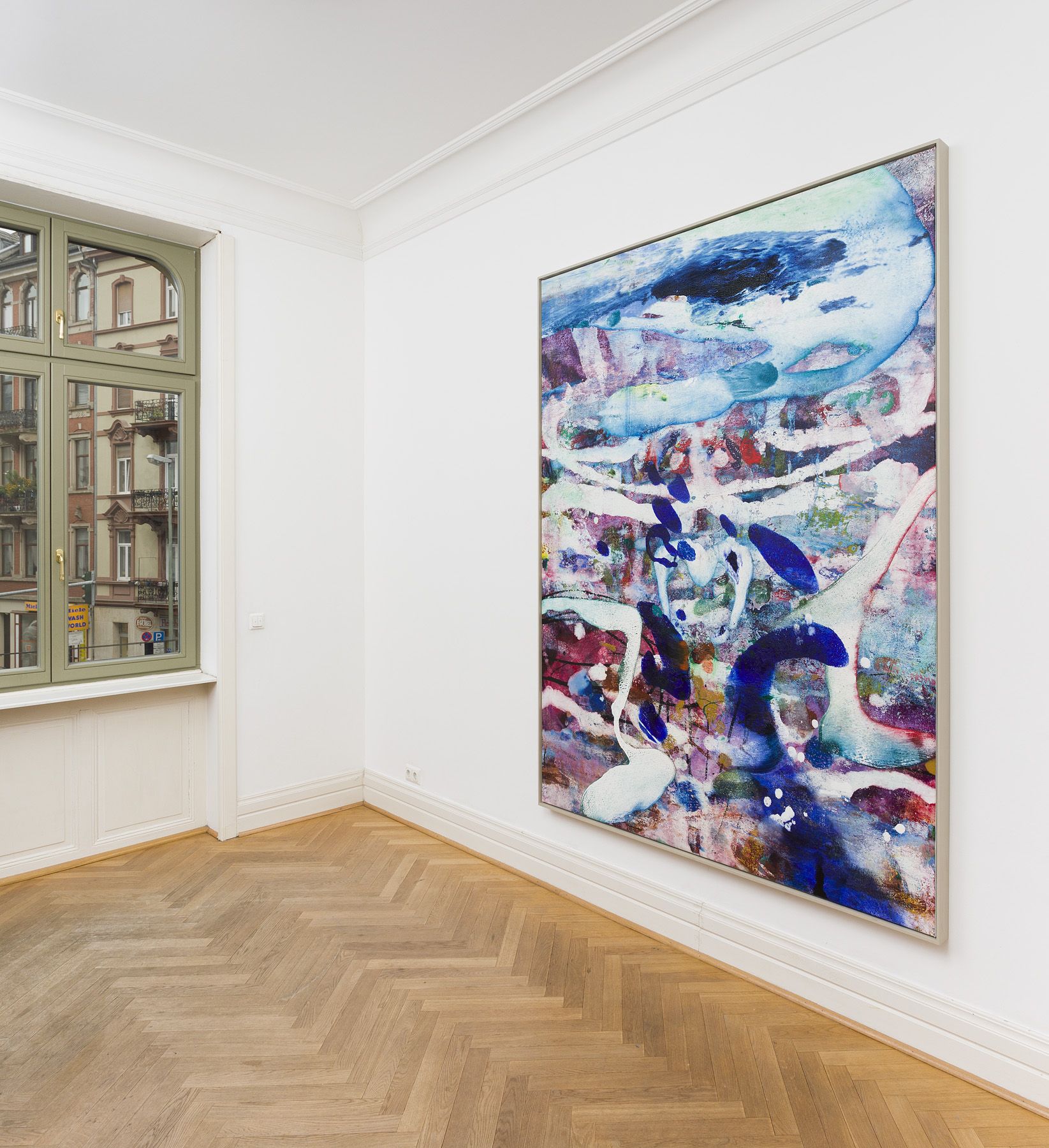